Firstly, apologies that the second part of this series is coming a little later than originally planned. I have my reasons, which will be discussed later.

If you missed part one of this topic, you can catch up below.

Read Part 1 of this series below…

This is a difficult post for me to write. Finally, I went to the doctors today to disclose the deterioration of my mental health as my physical challenges progress. As a man, it feels like failure but I have to remind myself that it takes a strong person to recognise that you need, and to […]

First, a thank you

So before I discuss this subject in more general terms, a quick update on me. I wanted to say a huge thank you for all of the kind messages and comments that were sent to me after part 1 of this series. It blew me away., genuinely.

I started this series to raise awareness and discuss the links between chronic illness and mental health – not to get the violin out for me personally. Yet sharing my experiences of this is a key part of that story and helps highlight the issue. No matter how uncomfortable. So those that did reach out, thank you, I really appreciate it. This isn’t an easy series to write.

It brings me onto an important point if supporting a friend or loved one through mental health struggles. They may not want to talk, they may not even reply but I guarantee that on some level the sentiment registered and in some way, it helped.

This is a statement that is all too relatable to those of us with chronic illness, such as arthritis. You are given your diagnosis, sometimes after years of waiting, your treatment plan is outlined and that’s it. Very little thought is given to the mental and emotional stresses and strains regarding living with that condition. Neither for support in coming to terms with the thought of having to manage that condition for the rest of your life.

Patients with chronic conditions often have to adjust their aspirations, lifestyle, and employment. Many grieve about their predicament before adjusting to it. But others have protracted distress and may develop psychiatric disorders, most commonly depression or anxiety

I think it’s safe to say that those last two sentences are where I am at right now. Despite living with this condition for over 20 years, since I was 11 years old, I haven’t adjusted on this occasion. I was ‘normal’ under the control of biologics and since they stopped working, it’s like I forgot what it was to live with the disease. The limitations, the adjustment of aspirations, the lower value I now bring to the table with increased unreliability due to sickness. Grieving is the right word. It’s the exact word. I am grieving for the person I once was.

As I mentioned in Part 1 of this series, my mental health is suffering as a result of my medical condition. Not because I am mentally unwell in isolation. Yet, there is no link-up between the services that support these areas. In my case, no collaboration between rheumatology and the local Wellbeing team. There isn’t even joined up thinking between rheumatology and obvious services such as the pain management clinic. It’s a missed opportunity and often means that people have to get really unwell mentally, with conditions such as anxiety, depression or worse, before they get the help they need.

This has to change.

I have had two large flares in my life if you don’t count the years I was unwell as a child, from onset until it was controlled by treatment. One in my mid-twenties when psoriasis first presented, the other is the current well documented one from January 2019. In both cases, mental health was an issue.

In my twenties, oddly, my flare was preceded with mental health problems.

What I am about to share with you, I haven’t told anyone outside of my immediate family, who supported me through this episode. So keep this in mind and be gentle on me!

I developed psychosis out of nowhere. I had never had mental health problems in my life up until that point but I started hearing and seeing things that were not there. Not like schizophrenia or those very unwell people with lifelong conditions that you might see in movies. This was a harmless experience of radio static, background noise, or initially seeing shadows or objects as something more threatening than they really were. That’s not to say it was any less upsetting at the time but once I learned to live with it, it became more of a nuisance than a problem.

It can be difficult to diagnose depression in the medically ill. Physical symptoms such as disturbed sleep, impaired appetite, and lack of energy may already exist as a result of the disease. Sometimes treatment for a medical condition (for example, the use of steroids) may affect the patient’s mood, as may the disease process itself

It was a dark time in my life. I was placed on all sorts of antipsychotics that caused me more problems than the issue itself. I gained weight, vomited most mornings and looking back, I wish I just rode it out rather than take the medication that messed me up. Anyway, I digress. The important point here is that it coincided with the flare.

The jury is still out on whether it was inflammation in the brain that caused these symptoms to go as quickly as they came or because my body was gradually changing. The pain slowly increasing, that potentially triggered a subconscious mental health response. Who knows?

The second flare, happening now, is more typical. As your chronic illness deteriorates, you worry about the future, struggle with being in constant pain day and night, lose self-esteem as quickly as you lose movement and before you know it, you’re depressed. It doesn’t take a medical professional to understand that so why is more not being done to support those in our position?

My condition has been deteriorating for over a year. We can all see there is only one direction of travel so why not put things in place before they become a problem?

Eventually, I asked for help. Yet I am waiting weeks for talking therapies and was offered an antidepressant/sedative that would also help with the pain that gave me a horrendous experience. I won’t go into detail but essentially I slept for two nights and a day, didn’t eat or drink a thing in over 30 hours, hallucinated and had suicidal thoughts. Needless to say, those tablets went in the bin after one dose!

I am lucky. I have a supportive family and I’m pretty confident focusing on my son would pull me through any mental health crisis. But what about those without people around them? Or who’s untreated mental health problems have meant loved ones have been pushed away? If they would have taken that tablet – and subsequently told to persist with it – where would they be?

In my personal experience alone, I have been told to contact:

All of these places passed me off to someone else or gave a reason as to why they couldn’t support me. Only for me to end up back at my GP on tablets. It’s madness and you can completely understand how people fall through the gaps. I am still in a place where I want to fight. I am lucid. Spare a thought for those who are not or are in a much worse position. Are they going to keep going around the houses waiting for someone to listen? Knowing how hard it is to talk about this sort of thing myself, I’d suggest not.

I say that this situation is not good enough. We know that our health services are at breaking point. We know that here in the UK, mental health services are massively under-funded. But it shouldn’t mean that we just accept it as the ‘norm’. Something as simple as mental heath liaison teams in hospitals interfacing with departments that specialise in chronic conditions could help this. Rheumatology is one, those being diagnosed with illnesses such as multiple sclerosis or ulcerative colitis are another that come to mind.

This idea isn’t fully formed yet but as part of this series I plan to campaign for change. Campaign for closer ties between chronic illness and mental health. So that people like me and thousands of others in the UK alone, don’t have to jump through hoops to get the support they will inevitably, at some point, need.

Prevention has to be better than the cure.

Do you have any ideas or suggestions about this campaign? Or if you would like to share your story of chronic illness and mental health with the readers of JoelvsArthritis then contact us. 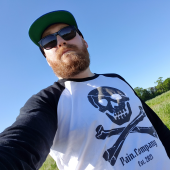 How do you deal with being off work due to poor health?

Treatment changes to save money – what about the patient?

"Did you have a nice relaxing holiday?" NO. I have a chronic illness.
Took Dylan to the forest for the first time today. Needless to say, he was in his element.
Dylan's slightly confused why he found himself and daddy in nanny and grandad's paper this morning. 😅🙈
As it's #mentalhealthawarenessweek, let's talk sleep.
Share This
%d bloggers like this: